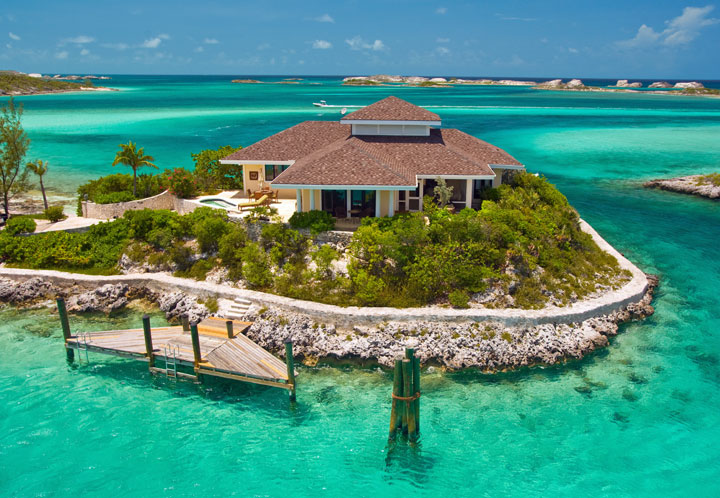 Whether you fall in love with Grand Bahama at first sight, or quietly grow to love it after a few vacation dates, there is a certain magnetic quality about this island that keeps people coming back again and again and it also draws people to purchase their own homes here. A big part of the attraction is that Grand Bahama represents the best of both worlds. It has all the basic ingredients of a tropical paradise: year-round sun, 25 miles of sandy white beaches, swaying palms, championship golf courses, and some of the prettiest crystal clear aqua waters in the world. The island is also ideally located just off Florida's fast paced fun-coast, only about 70 miles from Miami, Ft. Lauderdale and West Palm Beach. Finding everything you want in a relaxed, charming, get-away-from-it-all island, so close to the United States, is a combination that's hard to beat. And a combination that has lots of well-traveled people from all over the world purchasing villas to make Grand Bahama Island their second home.

The wide paved boulevards lined with beautiful villas, manicured roadways, miles of well-planned waterways are all part of Freeport/Lucaya's modern infrastructure, which got its start back in the mid 1950s when an American entrepreneur named Wallace Groves laid the strong foundation for today's residential and business boom. Wallace's original vision of a professionally designed and planned community, complete with homes, clean water, state-of-the-art power and utilities, cutting-edge technology and communications, all carefully nestled within the abundant natural beauty of Grand Bahama, is alive and well today, clearly visible in an island infrastructure that is second to none in the region.

A GREAT PLACE TO LIVE

Freeport/Lucaya is unique in the entire Caribbean. In Grand Bahama, the enjoyment of relaxed island living in stunning property is reliably supported by a clean, well-planned, up-to-date infrastructure that lets you truly relax, knowing the basics are already taken care of. It is also remarkable in this day and age to find an unspoiled place with great real estate options with no pollution or traffic congestion, only a 30 minute plane ride from South Florida.

Grand Bahama offers an unparalleled lifestyle in stunning property and surroundings, and the chance to get in on the ground floor of some tremendous growth. The island is just beginning to be discovered it often reminds people of the opportunities they saw 40 years ago in Florida.

Grand Bahama Island has attracted worldwide attention lately due to the recent investments of Hong Kong based Hutchison Whampoa. In a short span of less than three years, their port division, Hutchison Port Holdings, the global leader in port development and operation, has built one of the largest transshipment container ports in the world at Freeport Harbour in a joint venture with The Grand Bahama Development Company. Together, they are also developing a Sea/Air Business Centre that is uniquely situated on 786 acres in a tax-free trade zone. The Sea/Air Business Centre will provide millions of square feet of commercial Bahama Real Estate in the form of warehouses and office space, linking the Freeport Container Port with Grand Bahama International Airport, allowing companies to take advantage of a container port that can handle the largest ships in the world and an airport that can handle the largest planes in the world, all in a tax-free, duty-free environment. The Sea/Air Business Centre already has generated tremendous interest by worldwide corporations interested in doing business in Freeport.

Grand Bahama will also find itself in the world spotlight as plans for The Bahamas Film Studios, a $76 million state-of-the-art film production and entertainment complex, currently under development, takes shape. The master plan includes a film and television production and post-production facility, a music-recording studio, movie theme park, waterpark, restaurants, retail shops, and an historic Bahamian Village when all phases are complete.